We walked into Thomas Dillion’s Claddagh shop in Galway City holding our breath a tiny bit. All three of us wanted one; my mom, my cousin, and myself. We wondered if this shop was truly the original maker of the Claddagh ring … I guess you could say we were feeling skeptical, with a side of hope.

But the moment I saw the rings, I didn’t care anymore. I’d been in Ireland over a month before my mom and cousin joined me for part of my journey, and I had a sense that regardless of this shop’s claims, a Claddagh ring was meant to be worn on my finger. It’s a simple kind of knowing. Like when you’re attracted to someone. Or those times when you know you need to travel somewhere, but you continually ignore the call:)

Fifteen minutes later the 3 of us walked out onto the streets of Galway City with a Claddagh ring each. Now, how you wear the ring is important. It means something. Take a look a little more closely at our picture…what do you notice? 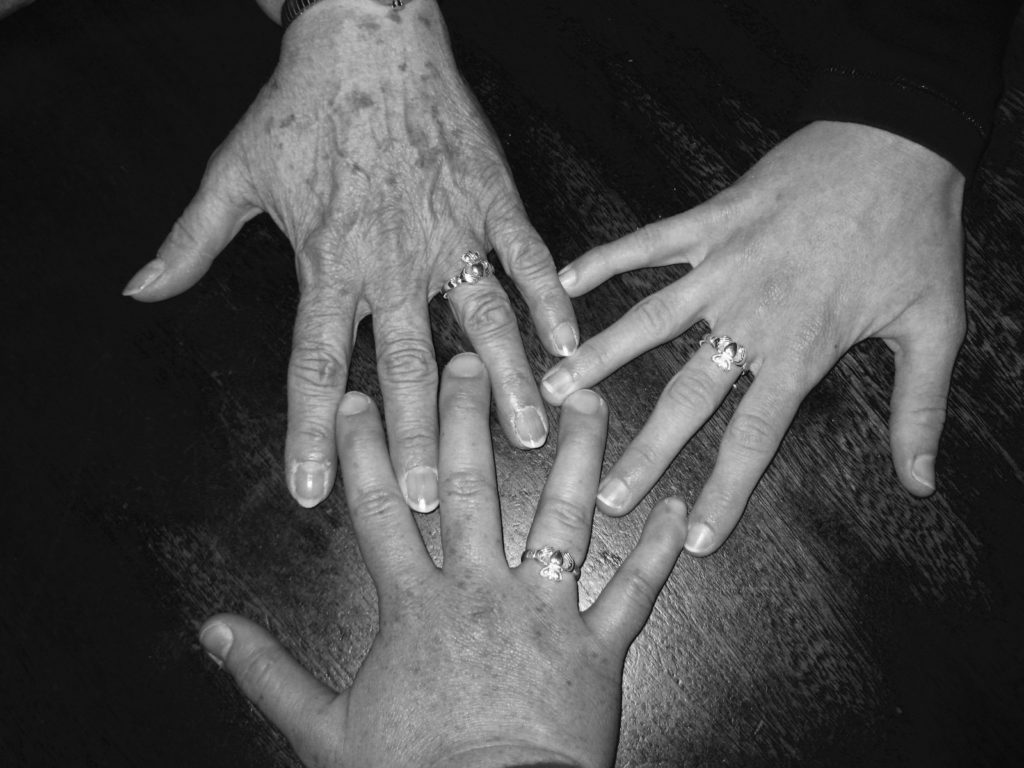 There are some complicated explanations out there on the web, but in simplest terms here’s what you need to know about how to wear a Claddagh:

Are you committed? If you’ve got a partner, wear the ring with the crown facing towards your fingernail. This means your heart is taken. Unavailable to be gentled by another.

Are you single? Then wear the heart facing towards your fingernail. This means, well, your heart is open. And hopefully ready for love…

The Crown represents loyalty, the hands, trust, and the heart, love. These simple elements spoke to me in a way that’s hard to put into words. But the moment I was gifted my ring, I rarely took it off.

The History of Claddagh

Claddagh was a fishing village long before Galway City was founded. The people there were renowned fishermen who had a fleet of boats called the Galway Hookers and a reputation for rarely losing their lives at sea. They remained an independent village for many years and eventually become incorporated into the city. The story is actually a bit sad, of proud and skilled people who’s livelihood was forever changed by modern ways of life. Click HERE to read the full story.

There is a bit of a debate going about the true origins of the Claddagh ring, but my favorite and the most spoken of goes something like this…

…in the 1600’s a young man named Richard Joyce from the village of Claddagh was out fishing with two other lads like any normal day for a Claddagh man. While out on the waters they spotted a Spanish pirate ship, but too late! They were kidnapped and sold into slavery in North Africa.

Richard was sold to a goldsmith and spent many years tending the fires for him. It is said Richard stole a small speck of gold many times over and eventually created a ring to take home to his true love, who he hoped upon hope, would still be waiting for him. And the legend goes that she did wait, they married, and the Claddagh ring was born. Beautiful, no?

Oh, and Thomas Dillon’s? Turns out they ARE the oldest makers. Their business started in 1750 and they are the only Jewellers in the world allowed to mark Original on their Claddagh Rings. John Wayne, Queen Victoria, and Walt Disney were all clients at one time.

Do you own a Claddagh ring? Has your family passed one down through the years. Write in and tell us your Claddagh stories!