I walked into the community hall in Kilchrohane right after lunch. Men and women stood in front of their granite slabs with chisel and hammer in hand, stone carving. This tap tap tapping filled the air, a new kind of rock music. I filmed a little bit so you could get a sense of the experience, but first, let me tell you about what’s going on this weekend on the Sheep’s Head Peninsula.

It’s called the West Cork Stone Symposium and it’s the 2nd annual running of the festival. Professional craftsmen from Canada, Ireland, Scotland, and the UK come down to West Cork and teach people how to carve stone and the old technique of making dry stone walls, something that’s been done in Ireland for over 5,800 years.

In this workshop, participants learn, using only traditional tools, some of the techniques involved in the craft of stone carving. They carve letters in local stone or try their hand at creating patterns and motifs, like the celtic knot or spiral. Over the course of the 3 days they’ll complete a small project to take home with them along with ideas on how to continue to practice the skills learned at home … pretty cool! Check out this video and hear the beautiful sound of chisel on rock…

If a wall is made using this technique it will most likely be a wall or feature on the landscape, like a field wall or a retaining wall and NOT a part of a building. There a good few examples of dry stone buildings in Ireland, but these have been mainly for agricultural use and have not been used as dwellings for quite some time.

A dry stone wall will absorb light in places and will cast shadows across the stone in the wall therefore giving the impression of being more three dimensional than the solid masonry wall.

During the weekend, participants get their hands (and their clothes:) dirty building a wall for the local community of Kilchrohane, where the festival is hosted. I went down and checked out their progress today. Check out the pictures: 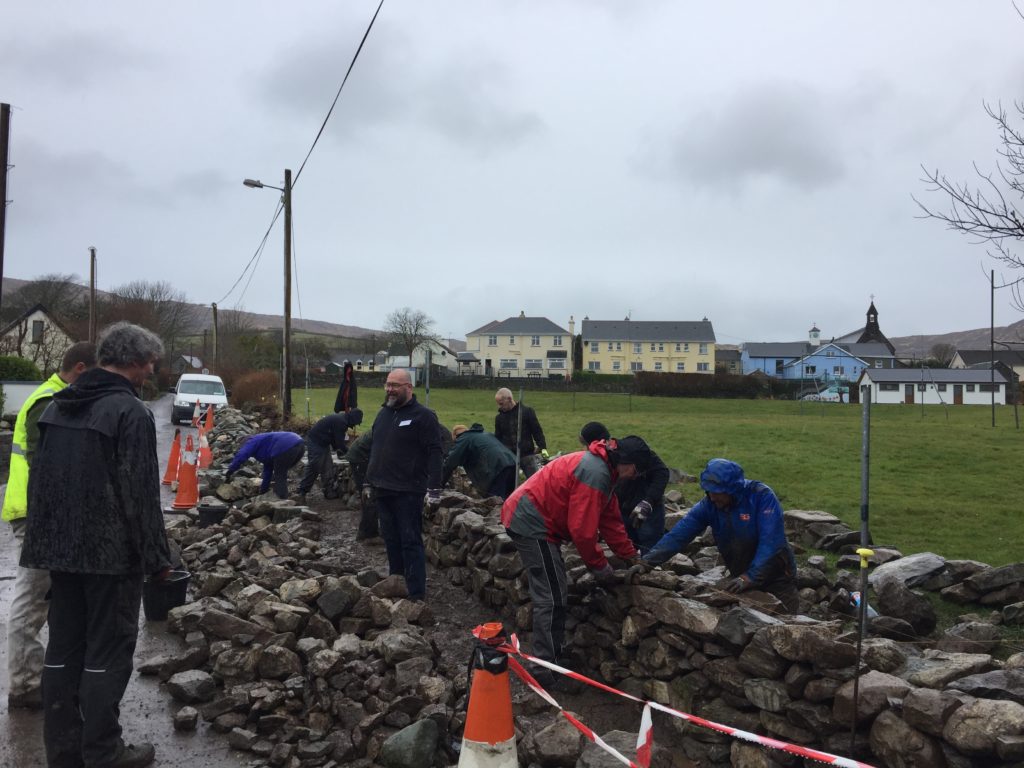 The Geology of West Cork

The Sheep’s Head Peninsula and a good portion of West Cork and South Kerry have a unique geological makeup to the rest of Ireland. Limestone is super common, but here it’s mostly old red sandstone. We also had our own polar ice cap during the ice age that uniquely shaped this area. Because, as they say in Ireland, West Cork just likes to do things differently:)

And before the ice age, Ireland was under water. So, if you’re lucky, you can find unique fossils when hiking on the Sheep’s Head. I’ve haven’t found one…yet:)

Needless to say, stone is a big influence on the Irish landscape. It’s everywhere. Organized and in chaos. And it has shaped the lives and imaginations of the people living here. From poets to stone carvers and farmers to musicians, it has been moved, chiseled, broken, built, and restored. It is Ireland. And Ireland is it.

Have you ever carved stone? Or built a wall? Have you ever been to Ireland and wondered about the landscape and why it appeared as it did? Leave a comment below, we’d love to hear from you!